Airbus A321neo British Airways. Photos and description of the plane

Airbus A321neo may accommodate 185 passengers in two-class version and 236 – in one-class configuration.

For A321neo Airline Company chose engines CFM LEAP-1A. The airplanes of the neo family may also be equipped with engines Pratt & Whitney PW1100G. Maybe this selection was made because Virgin America are using 63 airplanes A319 and A320 of previous generation with engines CFM56-5B. 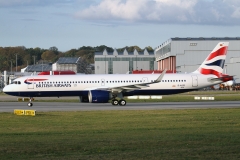