Boeing 737 MAX 8 Aeromexico. Photos and description of the plane

This airplane has dimensions of popular Boeing 737-800 but has much better economical characteristics. Improvements have been achieved due to installation of new engines CFM International LEAP-1B and also a number of improvements in the wing and body construction.

Commercial use of the Boeing 737 Max 8 airplane began in May 2017; first Customer who received the airplane became Malaysian Airline Company Malindo Air. At present moment airplane is actively constructed and number of orders is permanently growing. Except passenger variant is also planned creation of the business aviation airplane under designation BBJ MAX 8. 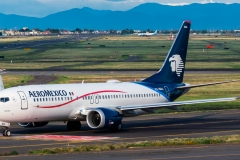