Boeing 787-8 Scoot Airlines. Photos and description of the plane

“Scoot Airlines” operates 10 aircrafts Boeing 787-8 Dreamliner. At the end of 1990’s became obvious that airplane Boeing 767 that was very popular from the beginning of 1980’s began to go out of date.

This fact has started to bring to the first place Airbus Company. That is why Boeing Company decided to create new airplane that had to be more fuel efficient than its’ predecessors and competitors and they counted on high speed (that had to be close to sound velocity). Namely thanks to less time flights it was planned to reach economy during use of the airplane. New model got the name Boeing Sonic Cruiser.

Boeing 787 Dreamliner is the newest airplane constructed by Boeing Company. A number of successful modifications of this passenger airplane show that it has big constructive potential but increasing number of orders on the airplane allow making conclusion that this engine will have promising future on the world market of air transport service. 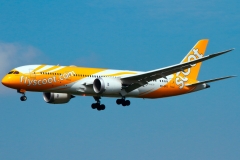 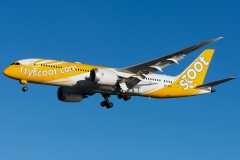 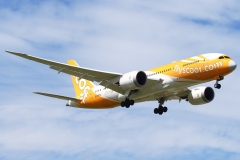