Boeing 787-9 Dreamliner Aeromexico. Photos and description of the plane

Passenger capacity of Boeing 787-9 is increased by 16% (up to 280 passengers). The airplane exceeds the base model in flying range as well that is 15372 kilometers (that is 850 kilometers more than in case of 787-8). Aviation Company affirms that the aircraft consumes by 20% less fuel as compared to similar airplanes including previous models of the corporation.

As to characteristics modification of Boeing 787-9 is comparable to Boeing 767 and is called to replace variant with increased flying range – Boeing 767-400ER.

Assembly work of the first airplane Boeing 787-9 began in June 2013 in Everett, Washington DC. The first ordering customer became Air New Zealand that has signed contract for ten airplanes of this type. 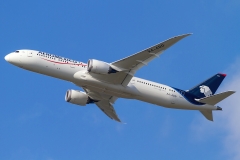 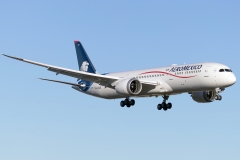