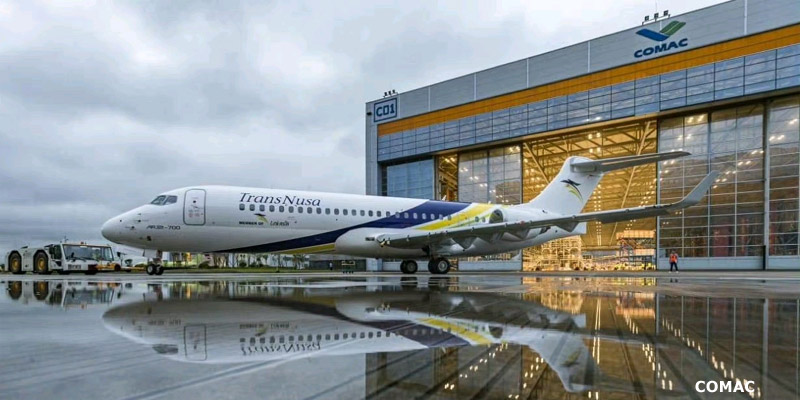 Airplane ARJ21-700 was transmitted to operator in mono-class configuration for 95 seats. Cabin design and painting are made in accordance with customer’s requirements, COMAC informed. The airplane (manufacturer serial number MSN186) has already received Indonesian registration number PK-TJA but there is no data yet when it comes into commercial use.

Delivery took place in the framework of the program “One Belt, One Road” one of the tasks of which is widening of Chinese representation on the international logistic market through development of infrastructure and investments.

Transmission of the airplane took place in Shanghai on December 18th, however TranNusa hasn’t announced as of yet plans about ARJ21. Contract for 30 units was signed between TranNusa and lease company China Aircraft Leasing (CALC) in January 2021. At the moment of the contract announcement company made flights on the turbo-prop airplanes but now it operates medium-range airplanes: two Airbus A320 and one A320neo. The web-site of the airline company informs that since December 2021 TranNusa switched to the model of low-cost transport. It takes less than 2% of Indonesian market.

CALC controls TranNusa through affiliated structure Aviation Synergy that owns 49% of the airline company’s share. Chinese lessor indirectly has 50% of the voting rights and 75% of property share in TranNusa.

According to application filed by CALC to Hong Kong Stock Exchange, airplanes will be delivered step by step till 2026.

At present moment in operation are 52 airplanes ARJ21, all in Chinese airline companies including Beijing Airlines, Chengdu Airlines and OTT Airlines.