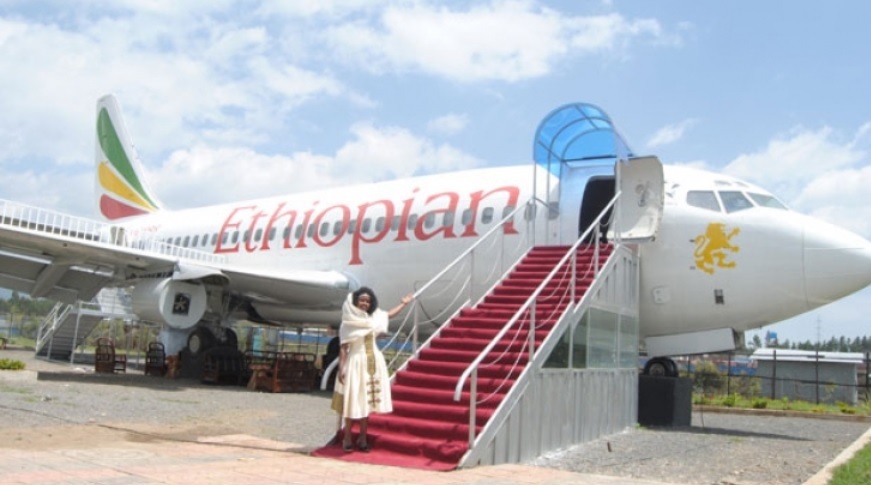 Meal at height: in Ethiopia old airplane was turned to cafeteria

Boeing 737 is the most popular passenger airplane during entire history of commercial aircraft industry. Its first generation flights since 1967 and till present 10 modifications have been launched. In 2012 making decision to get rid of outdated model national air carrier of Ethiopia sold via auction airplane for 1.5 million USD. The Buyer was businessman Guttama Gutta from Addis Ababa suburb – Burayu town.

He wanted to expand business for a long time already planning to open new entertainment center. Seeing the airplane Gutta understood that he can turn it into modern cafeteria. And he managed to do it though not at once.

The first difficulty waited the businessman on the stage of delivery: it took 7 hours despite the fact that the road was just 15 kilometers long. Before loading huge aircraft on heavy hauler-trailer was necessary to disassemble the wings. Afterwards during 2 years the “room” was repaired and finally in November 2014 aero cafe 34 meters long and 14 meters wide received first callers.

It became famous at once thanks to its originality but then it became even more popular thanks to the bees that settled down among mechanism of the airplane. Administration of the cafeteria decided to obtain profit out of it using unexpected “bee yard” appropriately. Now liqueur is made of the honey that has no match in taste and quality. Fermentation lasts about one month. Visitors say that honey beverages may be ordered in many Ethiopian cafeterias but they are not natural and so tasty.

Like in common airplane the cafeteria has economy class and VIP-zone; total capacity is 60 people.