Airbus A319 Emirates. Photos and description of the plane

Construction of this airplane began in 1990. This airplane may accommodate 120 passengers. The main competitors in this sector were McDonnell Douglas MD-87, Boeing 737-300 and 737-500. First ordering customer was French company Air Inter.

This airplane is also equipped with systems that are installed on Airbus A320. Thus airline companies save on crew training. 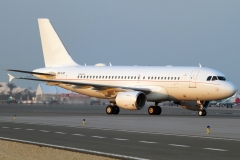